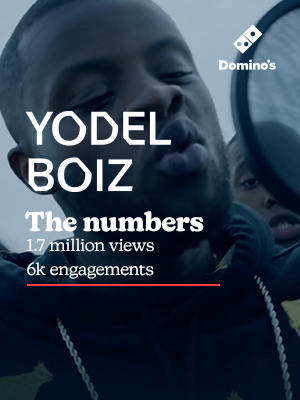 In partnership with Channel 4 and Domino's, we combined the worlds of Drill and Yodelling to make something truly unique; Uk Yodel Rap.

The comedy short was realistic in its portrait of the UK Rap scene, delivering deadpan humour that had audiences questioning whether the ‘Yodel Boiz’ were actually real. The film followed Domino’s above the line ‘Yodel’ campaign and the characters attention to detail meant that drill fans were in on the joke.

To spoof UK Drill world we knew that authenticity was key for acceptance, so we used legendary producer Rude Kid to make the music, whilst both the main characters were rappers in real life so the portrayal was accurate and the song was a banger! The subtlety of the brand connection meant that audiences were bought into the possibility of UK Yodel.

The film was received brilliantly, with just under 2 million views combined. Audiences even loved the tune, which made it all the way to being discussed on Radio 1, so there might just be a future for UK Yodel Rap.